In a recent meeting with a foundation that is considering making a grant to Seeds of Hope, the wonderfully personable and likeable foundation executive said, “What our board really wants to see is organizations killing it on outcomes.”

This statement came to mind when I was touring Saints Peter and Paul Catholic School with the fabulous Principal Sister Faustina, Catholic fundraiser extraordinaire Claire Tobin, and my friend and fellow Risen Christ Parish parishioner Craig Bowman because Craig is probably one of the best outcomes of Catholic education I have encountered. 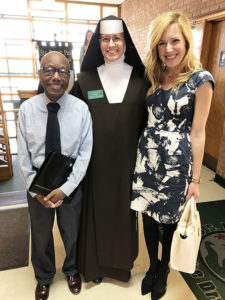 Born in Denver, Craig was orphaned at a very young age and grew up in the St. Clara’s Orphanage, which was located at 29th and Osceola, which closed many years ago. Craig went on to graduate from Mullen High School, then earned a degree from Metro State College and a master’s from the University of Denver. A lifetime of service, which continues today, began shortly thereafter.

Craig joined me on the tour of Saints Peter and Paul Catholic School because he had taught music there from 1968-1970, and he was interested to see how much had changed, and how much had stayed the same. It was fantastic to see the look on his face when we stepped inside the art room and he realized it was the room where he used to teach music. The best part of our tour, however, was when Sister Faustina led us to a series of historical photos along one of the school’s hallways that goes from present day all the way back to when the school opened in 1955. Strolling along the yellowing photographs as we progressed back in years, we found a faculty photo from 1968 on the wall that included Craig! It was touching to see he was obviously moved to find out he was permanently remembered as he had not seen the photo before and to hear some stories about his old colleagues in the picture.

When Craig needed help the most growing up, the Church was his rock. He devoted his professional life as a teacher, and much of his personal time and treasure, to paying it forward and helping others benefit from the same kind of support he received. He continues his work today as a volunteer, spending most of his time tutoring seminarians at the St. John Vianney Theological Seminary in writing and English, and volunteering at Risen Christ Parish in several roles. He is also an active donor to Seeds of Hope.

“Catholic education was the best thing that ever happened to me growing up,” Craig said. “It is beautiful to see these children here today building their futures and I appreciate the work Seeds of Hope is doing to make it happen.”

Paying it forward. Serving others. All out of love for Jesus Christ. As far as outcomes go, I am proud to say my friend Craig is killing it.

(Note: Executive Director Jay Clark will periodically provide observations on what is happening with Seeds of Hope. Any thoughts – and typos – in this post are owned by him alone.)

← Get some joy – tour a school!Living generosity →